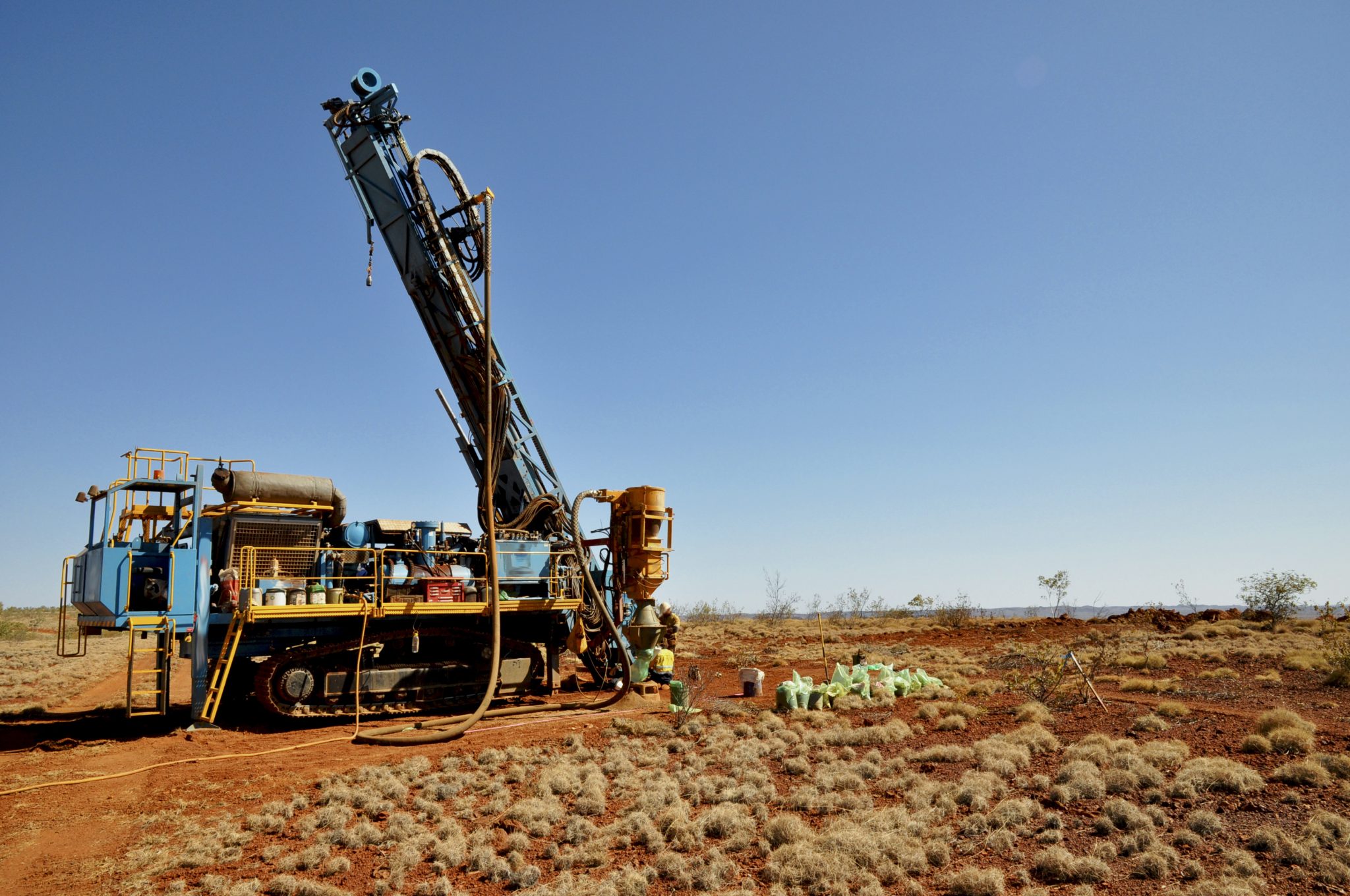 The Eclipse Gold Project is a high-grade mining licence located less than 55km north of Kalgoorlie, Western Australia,  and is accessible via a public road which runs through the project area.  Empire holds a 75% interest in the project, with the right to acquire 100%.  The project lies within the highly concentrated gold mining region of the Yilgarn, north-west of famous gold operations such as Kanowna Belle and Paddington. 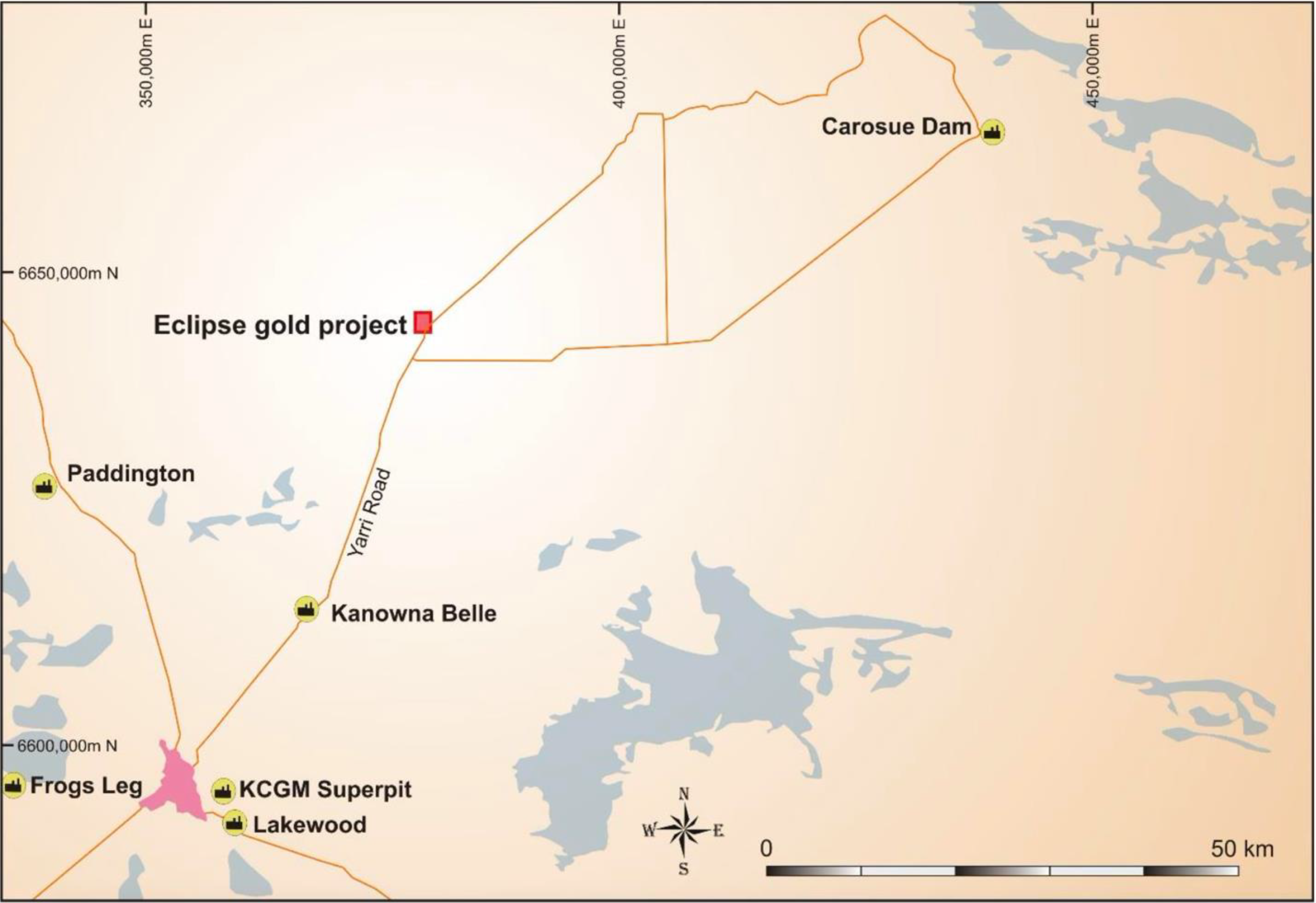 The location of the Eclipse gold project relative to major road and mill infrastructure and the city of Kalgoorlie-Boulder.

The Eclipse gold mine has had a number of owners since 1902. By 1910 the shaft was sunk to its current depth of 78 metres.  The production during this period was 954 tonnes @ 24.6 g/t Au for 754 oz Au (source: GSWA Mindex database) and in the 1990s the shaft was refurbished to the bottom level and the collar of the shaft was re-established with concrete.

Prospecting has occurred intermittently on the licence. However, since acquiring the property Empire has executed a systematic exploration programme comprising soils geochemistry, close-spaced ground magnetics geophysics, and RC and diamond drilling, from which the Company has proven the mineralised envelope at Eclipse is open both along strike and at depth, and also demonstrated there are multiple parallel veins which coalesce around the old Eclipse Shaft.

Free gold contained within quartz is reported from old workings in the east of the licence area, and there are also unverified accounts of nuggets reported to have been found along strike between the Eclipse shaft and Jack’s Dream.

Field work to date at Eclipse has comprised a series of (mostly RC) drill programmes, detailed ground magnetic geophysics, and soils sampling. Drilling has confirmed the existence of a number of parallel veins in addition to the main Eclipse vein, including a different stockwork style of near-surface mineralisation in the vicinity of the Jack’s dream old workings.

Further drilling (2020) in the vicinity of the Eclipse shaft has returned highly encouraging results including 3m @ 21.96 g/t Au from 45m (including 1m @ 56.9 g/t Au), which was drilled 30m along strike of existing historical workings and represents a previously unidentified extension to the main high-grade lode.

Selected significant drill intercepts in the 2021 programme include the below:

The Company is progressing with resource estimations and pit optimisations in the vicinity of the old Eclipse shaft and continues exploration at Jack’s Dream and elsewhere to evaluate resource potentials throughout the licence area. 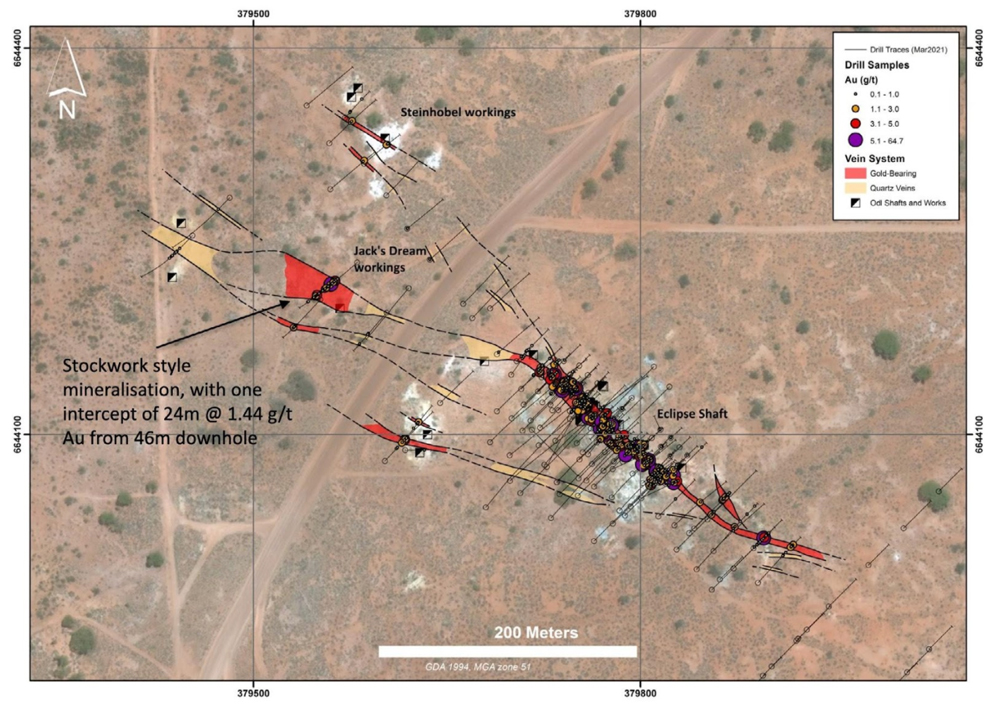 The Project is situated in the Gindalbie domain of the Kurnalpi terrane.  Within 3km either side of the Eclipse mining licence (M27/153) are north-south trending regional scale faults.  The Gindalbie domain is largely comprised of volcano-clastic sequences.  The volcanic units include assemblages of welded tuffs and tuffaceous lavas.  Clastic assemblages include interbedded siltstone, sandstone, shale and thin bedded conglomerates.

The Project is located on a north-west trending sequence of felsic-intermediate-mafic volcanics and clastic sediments.  All of the rocks are part of the Gindalbie Formation.  There is little exposure of the basement geology, with isolated float debris relied upon.

Various soil sampling campaigns have been completed.  These soil surveys identified elevated gold concentrations in the middle and southern portions of the Eclipse mineralised system.  They also recognised domains in the vicinity of the Houdini and Easy structures as being anomalous.  The peak gold-in-soil value at the Eclipse gold deposit is 170 ppb, while the peak value at the Houdini prospect is 73 ppb Au.  The peak value within M27/153 at the Easy prospect is 21 ppb Au, while the peak value outside the licence but on the same structure is 267 ppb Au. 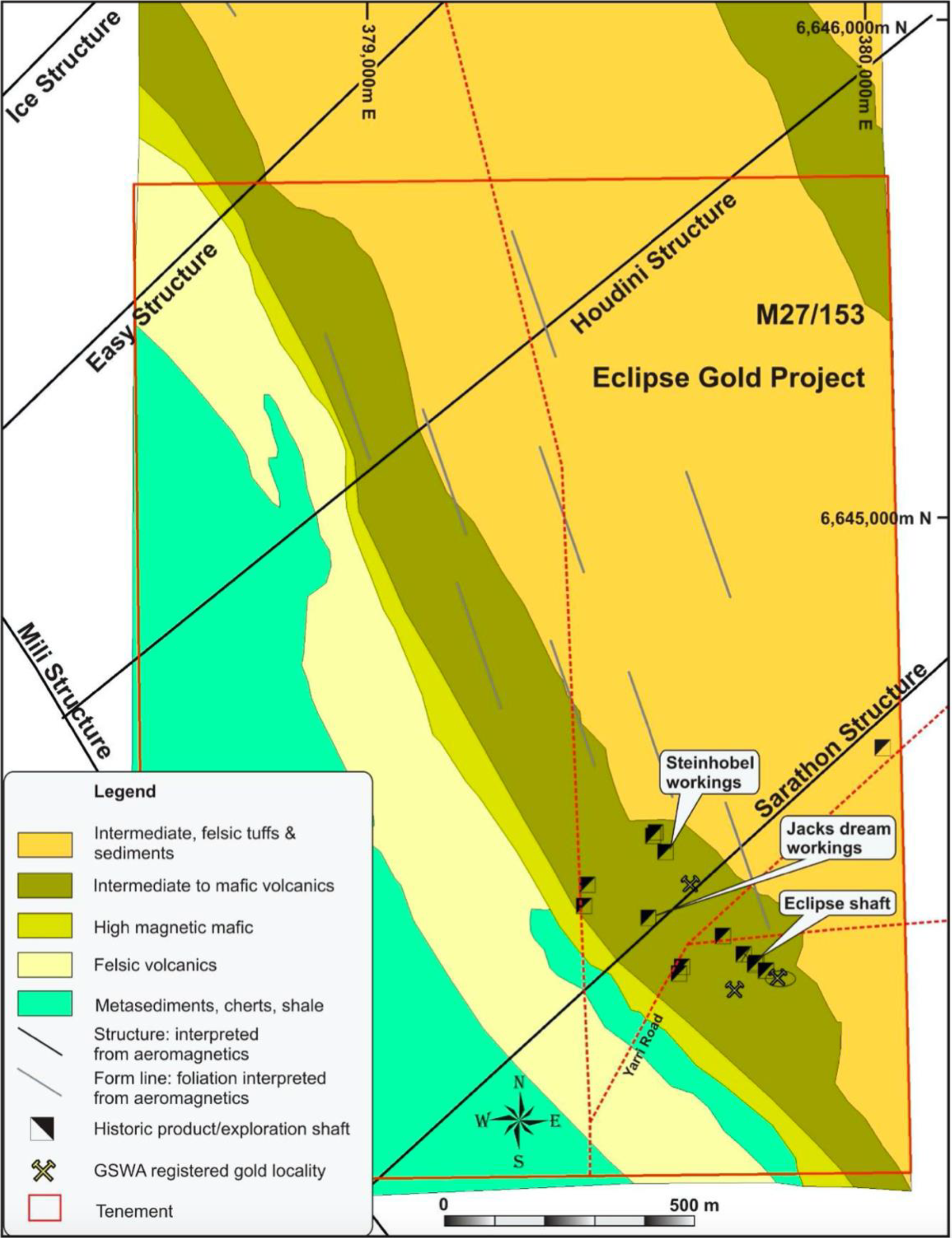 The local geology for the Project. The tenement outline is shown. Also illustrated are the GSWA records of gold workings/ deposits, interpreted structures and form lines and mapped shafts
This site uses cookies. If you consent to the use of these cookies, please click accept. Read more in our Privacy & Cookies Policy.